This is an example of a Rorschach Test image: 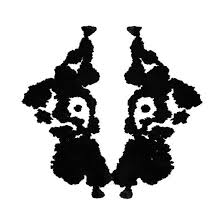 In the movies, psychiatrists show their patients these and try to seek meaning in the answer to the question, “tell me what you see?”.

For the record, in this example I see Lord Lucan recreating the Marty McFly guitar solo part during the cover of Johnny B Goode in the film Easy Rider while Edward G Robinson waves a declaration of cooperation next to an airplane that had recently landed from his meeting with Chancellor Dido.

Some people see a butterfly.

These strange situations where people report wildly different experiences when seeing or hearing the same situation are not as rare as one might think.

Recall the “viral” dress that was either blue and black or white and gold?

It’s not limited to visual experiences; here’s “yanni or laurel”.

It’s unsurprising then, to find these differences between our perception of reality elsewhere in life. Some examples we can find by simply watching the news;

– Some people think it’s highly unlikely an individual or group of individuals can collect and analyse enough data to successfully manage to a national economy. Some other people disagree with this, despite 200 million dead bodies in the ground during the 20th century, and are certain the best three people to undertake this task are called Jeremy Corbyn, John McDonnell and Diane Abbott.

Perhaps the pinnacle of this phenomenon of people having wildly divergent views of the same situation are the reactions to Donald Trump’s presidency.

The British have an expression that describes the differing reactions to Trump; like marmite.

Marmite is a salty yeast extract paste (similar to Vegemite in Australia). Nobody is ambivalent about its taste, you either love it or would rather chew your own fingernails off than eat it. A fact the marketing department used to their advantage a few years ago.

Similarly, I’ve yet to meet an American who metaphorically shrugs their shoulders and suggests Trump is neither terrible or the second coming of the Messiah.

Recently, I had a coffee with an American acquaintance and, towards the end of the meeting, she made a comment about how insane her home country was currently under the evil President.

Being an argumentative bugger, I thought I’d probe this opinion further, “ok, I’m not saying you’re wrong, but can you give me your three strongest reasons to persuade me he’s worse than any other previous president?”

In order, here they are and the counter points I offered:

It’s a difficult task to find a person who can express a nuanced view on President Trump, a view that suggests he’s neither the worst or the best holder of that office.

It’s my opinion that most people take their opinions verbatim from their selected news source.

Why aren’t the news sources presenting this nuance then? Perhaps it’s not in their interests.

The best explanation I’ve heard so far was expressed by Brett Weinstein on this podcast (go straight to the 1 hour mark and listen for about 4 minutes).

It’s an interesting theory that everyone knows the ideas of the last 10 years are insane but it’s not in anyone’s interests to say so publicly, so the madness remains. Weinstein articulates this far better than I, though.

In the meantime, my pronouns are zhe, zher and zhers:

13 Replies to “The age of Rorschach tests”